Microsoft announced that the Xbox One owners now will be able to upload gameplay clips directly to YouTube using Game DVR. Microsoft is rolling out an update to the YouTube app on Xbox One that integrates Game DVR and Upload with YouTube. Once the update hits (starting tomorrow), it will be easier than ever to capture and share game clips with the people around the world. 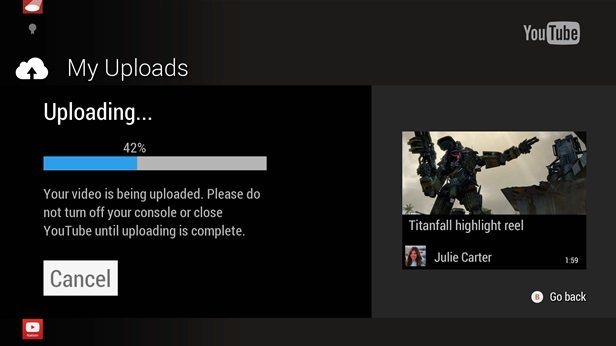 Previously, Xbox One users needed to jump through OneDrive as an intermediary to upload gameplay clips to YouTube. When the update is released, Xbox One owners will be able to upload their personal recordings directly to YouTube just by clicking a button inside the YouTube app. This is the second major upgrade since the console’s launch for gamers who want to share their recordings with others, the first being the addition of HD streaming and archiving on the Twitch app last month.

When the update rolls out, you have to go into the console’s settings menu and enable the social sharing feature first. In Settings, elect to “Share game clips” and “Share on social network”. Use Game DVR to capture epic gaming moments, edit them in Upload Studio, and, with the simple click of a button inside the YouTube app (look for My Uploads), share them instantly to your YouTube channel.

The updated YouTube app also allows you to watch YouTube videos in Snap Mode, add your favorite YouTube channels to the OneGuide, add new videos to your Pins and more.

Get Xbox One Games