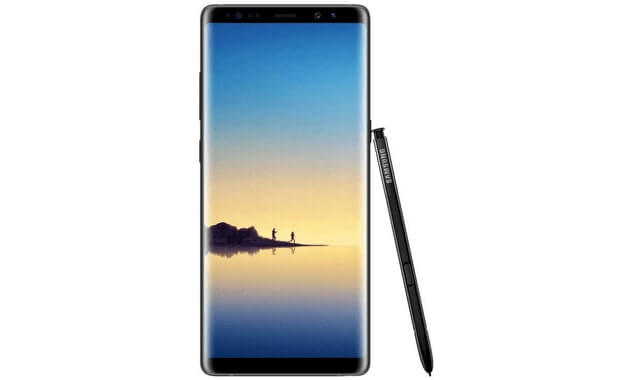 On the specifications front, the Samsung Galaxy Note 8 features 6.3-inch Quad HD+ Super AMOLED Infinity curved edge display with 522ppi, 18.5:9 aspect ratio, resolution of 2960 x 1440 and the display protected by Corning Gorilla Glass 5. The smartphone is powered by Octa-Core Qualcomm Snapdragon 835 processor which is paired with Adreno 540 GPU or Octa-Core Samsung EXYNOS 9 series 8895 processor which is paired with Mali-G71 MP20 GPU. The smartphone runs on Android 7.1.1 Nougat operating system and has Samsung TouchWiz UI on top of it. The smartphone has 6GB LPDDR4 RAM and 64GB/128GB/256GB internal storage which can be expanded further up to 256GB via microSD card.

The Samsung Galaxy Note 8 comes with an Infinity display and has an aspect ratio of 18.5:9. The display also features HDR support that allows you to stream content from Amazon Prime Video or Netflix.

The smartphone comes with Bixby assistant and has a dedicated Bixby hardware button. If you can recall, the Bixby Assistant was first introduced with Samsung Galaxy S8.

The smartphone comes with IP68 certification for water and dust resistance that means you can submerge the smartphone under 1.5-meter water for 30 minutes.

The smartphone comes with improved S Pen Stylus with finer tip and improved pressure sensitivity that can sense 4,096 level of pressure with a latency of fewer than 50 milliseconds. It lets you share animated GIFs to several popular messaging & social apps. Apart from this, the S Pen Stylus comes with improved S Pen Translate feature that lets you hover text & it quickly translate entire sentences in up to 71 languages, and convert units & foreign currencies in no time. What’s more beautiful, the S Pen Stylus works on the screen when submerged under water. The smartphone comes with “Always On” display feature and it lets you share S Pen to jot down quick notes without turning the screen on.

The smartphone packs 3300mAh non-removable battery with support for fast charging both on wired and wireless (WPC and PMA).

“We appreciate the relentless passion of the Note community. They’ve been a constant inspiration to us and we designed the new Note for them. From the Infinity Display to the enhanced S Pen and a powerful Dual Camera, the Galaxy Note8 lets people do things they never thought were possible.”