Nokia XL was announced at the Mobile World Congress 2014 at Barcelona and now today it is available in India from the official Nokia Shop at an initial price of INR 11,489 & it is available in Black, White, Cyan, Orange, Yellow and Green colours. Currently, it is available only in Green colour and promises to deliver in 5 working days. The Nokia XL is a dual SIM smartphone boasting a 5 inch WVGA display with resolution of 480×800 pixels at 233ppi. It runs on theNokia X software based on AOSP Android 4.1 Jelly Bean and powered by 1 GHz dual-core Qualcomm Snapdragon S4 Play processor paired with 768 MB of RAM. 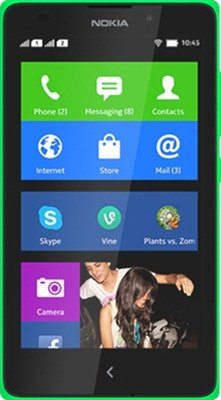 It has in-built storage of 4GB which is expandable up to 32GB via microSD card. It is equipped with 5MP auto-focus rear-camera with LED flash and 2MP front-facing camera for taking selfies & video calls. It packs 2,000mAh battery which claims to last for up to 16 hours of talk time & up to 720 hours of stand by time.

It has a highly customized version of Android platform that is enhanced with the Metro-inspired UI and access to Nokia’s own store. Much like the Nokia X, the Nokia XL Dual SIM also has no access to the Google Play Store, but users can side-load Android apps from any third-party sources. This is possible as Nokia has used AOSP based on Android 4.1 Jelly Bean as the baseline for its operating system.