Google Hangout was announced at the Google I/O 2013 event. Hangouts aren’t as impressive as Google Talks as they lack some basic features like there is no option available to make yourself “invisible” just like Google Talk. In this post I’m sharing how you can revert back to Google Talk from Hangouts.

Step3: Now click on the “Arrow” marked near your name (marked as 1 and name is Vivek). As soon as you click on the Arrow you see a drop-down, now choose on “Revert to Old Chat” (marked as 2). 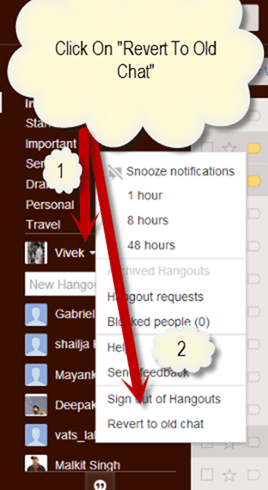 Step5: So, now you get back your old chat. Happy?

Isn’t it too easy and simple? Within just couple of clicks you move back to old chat. So, if you are still unable to revert back to Google Talk let me know via comments!