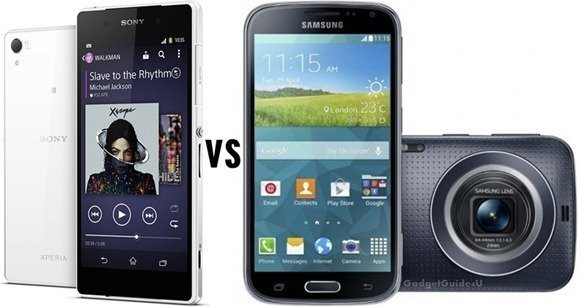 Earlier Sony announced the latest flagship smartphone Xperia Z2 at MWC 2014 and if you do not know, it is a major upgrade when compared with Sony Xperia Z1, especially  the camera and hardware has gotten a definite boost. The Sony Xpeira Z2 combines Sony’s best design, display, sound, camera and camcorder experience. One of the highlights of the device is its 20.7-megapixel camera with 4K recording support and host of features including image stabilization. Sony Xperia Z2 is a camera centric smartphone for camera lovers who love photography with their smartphones. In this post we are comparing Xperia z2 with another cameraphone, Samsung Galaxy K Zoom. The Samsung Galaxy K Zoom is a hybrid between smartphone and a point-and-shoot camera and the highlight of the smartphone is 20.7MP camera. Already in earlier post we compared Sony Xperia Z2 with Samsung Galaxy S5, HTC One (M8) and Apple iPhone 5S.